Sydney Women find living a comfortable life in Sydney has become harder and harder. New research shows 82% of women across all ages are finding it harder to live in Sydney and 85% feel alienated from the political decision-making processes shaping Sydney and Australia.

The independent research funded by philanthropy through Sydney Women’s Fund – explores the hopes, fears and dreams of Sydney women and seeks to take the pulse of Sydney Women in this moment, answering the question “If Sydney were 100 women, what does that look like?”

The research shows a lack of financial security indicating an emerging crisis for Sydney women, and an economically divided city. Almost half, (49%) of women say, “they’re struggling or just getting along”, and (59%) of these women are living in Western Sydney.

Women are insufficiently prepared for retirement. Only (11%) are confident they can finance their own future with retirement funds. (32%) of women say that if their relationship broke down, they would be at-risk financially.swf image

Despite their challenges Sydney women have a sense of optimism, (66%) feel positive about the years ahead.

In addition to economic stress, the research shows Sydney women face discrimination at worrying levels; (61%) experienced a negative impact of discrimination – based on race, gender, sexuality, disability – in the past 12 months. 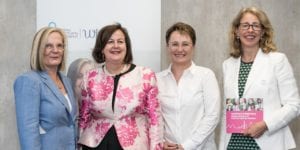